Will the Welsh Language Survive? My thoughts. 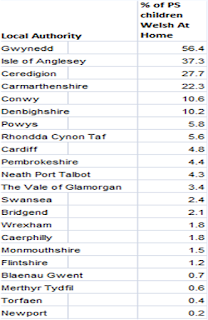 The question "Will the Welsh Language survive?" has been on people's minds for at least a hundred years, and so one day I thought that I might try to answer that question from the year 2017.    To do this, I have looked at the School Censuses from the years 2013 and 2016, and also at school Estyn reports, available online, where they mainly date back to the mid 2000s, to see how the percentage of children speaking Welsh at home in Welsh speaking areas has changed in recent years.  But first things first; where are the remaining Welsh speaking areas?  In other words, where is Welsh still alive today?  On the left is the percentage of state primary school children speaking Welsh at home in each local authority area in Wales according to the school Census of 2013.  As you can see, Gwynedd is the only area left where a majority of children still speak Welsh at home, but as those of you who have read my other blog articles will know, Welsh speaking areas still exist outside Gwynedd, in neighboring Conwy and Anglesey, and so those two counties will also be looked at.  Let's start with Gwynedd.

Gwynedd
For those of you who have read my earlier blog on Gwynedd, you will have seen that although Gwynedd is majority Welsh speaking overall, there are areas within Gwynedd where Welsh is no longer the main language spoken at home by a majority of school children.  These areas include the city of Bangor, west-coast Meirionydd south of Harlech and much of Southern Snowdonia, such as Corris and Dolgellau, while anglicised enclaves elsewhere include Abersoch and Beddgelert.  But what about those areas where WAH still is in the majority?

First, it is worth saying that there is quite a lot of good news.  The towns of Caernarfon, Blaenau Ffestiniog and Nefyn, all of which had more than 75% of their children speaking Welsh at home in 2016, and actually had higher percentages in 2016 than in 2013, and with the exception of one catholic primary school in Caernarfon (Ysgol Santes Helen), none of the schools in those towns showed any sign of serious deterioration over the previous decade.  Pwllheli too, appears to be safe, the percentage of children speaking Welsh at home in the town's primary school appears to have remained in the mid 60s over the last decade.  Porthmadog, too, apears to be quite safe, with the exception of its anglicised suburb of Borth-Y-Gest, and in fact in Ysgol Y Gorlan, in Tremadog, the percentage of children speaking Welsh at home increased from around 50% in 2008 to over 70% today.

Outside these towns too, the picture appears to be not that different.  Northern Meirionydd as a whole appears to be stable (with the exception of Bala town), as does rural Dwyfor and most areas within the Dyffryn Nantlle and Brynrefail catchment areas (I'm partly going by secondary school names). So far quite good, however there is also some very bad news.

In 2004, 64% of children in Criccieth's primary school spoke Welsh at Home, by 2016, only 40.6% did.  Although the Dyffryn Nantlle is mainly stable, school playgrounds that seem to be experiencing Anglicization include those in Nebo and Talysarn, while the primary school in Pontllyfni appears to have gone from 57% in 2007 to 73% in 2013, only to fall back down to 59% in 2016.  The town of Bala appears to be approaching the brink literally as we speak, in 2013, 60.3% of children in the town's two primary schools spoke Welsh at home, by 2016, the figure was 52.9%.  Llanberis, at the foot of Snowdon, appeared pretty safe in 2013 when 69.1% of the pupils in Ysgol Dolbadarn spoke Welsh at home, but by 2016 this had fallen to 53.6%.  But more worrying perhaps, is what appears to be happening in the Ogwen Valley.  The post industrial town of Bethesda is one of the key strongholds of the Welsh language, and is served by two primary schools, Ysgol Abercaseg (Babanod) which serves 3-7 year olds and Ysgol Penybryn, which serves 7-11 year olds.  In 2013, the figures for the two schools were 72.4 and 70.6%, respectively, but by 2016 the figure for Abercaseg had fallen to 53.6% while Penybryn had stayed more or less the same.  It may well be that the forces of Anglicization that had already effected the lower reaches of the valley have now reached Bethesda; Tregarth, located further down the valley, has already fallen; in 2008 half the pupils there spoke Welsh at Home but 8 years later barely a quarter did.  Likewise the figures for primary schools elsewhere in the valley, such as Rhiwlas and Mynydd Llandegai, point to a grim future for the language in an area that has been so important to it.  It could also be, however, that the construction of Zip World may have had an impact, given that 2013 was the year that it opened in Bethesda.

The situation in the remaining Welsh pockets of Southern Snowdonia, located near the now anglicized town of Dolgellau, isn't actually that grim, despite this Welsh speaking area being much smaller than the others.  Ysgol Dinas Mawddwy as well as Ganllwyd and Brithdir all saw substantial increases in the percentage of children speaking Welsh at home, so much so that in Dinas Mawddwy, it was above 50% again (having previously fallen from 73% in 2007 to 40% in 2010), although its worth saying that the figure for Rhydymain's primary school fell from 69.2% to 44.4% between 2013 and 2016.

Anglesey and Conwy
Those of you who have read my blog on the state of Welsh in Anglesey will know that, judging by the percentages of children speaking Welsh at home, it is mainly the interior of the island, and the north west as well, that is still Welsh speaking, and that coastal areas from Holyhead clockwise to Cemaes, with the exception of places like Llanfairpwll, have been anglicized.  So the question is, are the remaining Welsh speaking areas holding out?  Let's start with Llangefni, the last Welsh speaking town on the Island.  Things there seem to be pretty good; both primary schools are above 70% Welsh at Home and there appears to be no deterioration during the past decade.  Looking at the wider picture, in all the island's 23 WAH majority schools in 2013, 67.5% of pupils in those schools spoke WAH, and this fell to 65.9% in 2016.  However, the decline does appear to be concentrated in a certain few schools, although said schools themselves are not concentrated in any particular area.  The future for Welsh on Anglesey in those areas where it is still a living language appears to therefore be quite good.

Although only 10% of primary school children in Conwy still speak Welsh at home, those of you who have read my blog on that subject will know that there are significant rural areas where Welsh still prevails, some still in the Snowdonian portion, but mostly in the countryside to the east which isn't as popular with incomers.  Like with the Welsh speaking areas on Anglesey, there does not appear to be any approaching catastrophe - of the 12 primary schools there, more actually saw an increase in WAH between 2013 and 2016 than a decrease, an in fact, in 2016, Conwy was home to the only school in the country, it seems, where every child speaks Welsh at home, Ysgol Pentrefoelas. (!!)  It is, however, worth looking at Cerrygrudion, there the percentage of WAH fell from 85% to 77% between 2013 and 2016, and this cannot be solely explained by the school's merger with Ysgol Llangwm.  However, 77% is in no way close to the brink, and of course, in rural schools, numbers do fluctuate.

Other Areas of Wales
You may have wondered why I decided not to look at Ceredigion, Carmarthenshire and north Pembrokeshire in this blog; those areas, of course, having comprised the southern half of the 20th century Fro Gymraeg.  That is because, and I hate to say this, the future of Welsh in Dyfed is much grimmer - those of you who have looked at my blog on Ceredigion will know that such Welsh speaking areas don't truly exist anymore in Ceredigion, while the situation with Welsh in Carmarthenshire and North Pembrokeshire is even worse than in Ceredigion.  Welsh speaking children, do exist in such areas, but they are surrounded by children who don't speak it at home, and thus the language of play in these areas now, is English.  Again, I hate to say this, but to me it seems that the future of Welsh in Dyfed, like outside the Fro Gymraeg, is as a second language.  Please prove me wrong if you can.

Why have I done it this way? 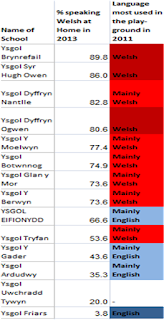 You may have noticed that I have not used the UK Census results to help me do this research, despite the fact that the Census is what the authorities and academia have been using for the past 120 years.  This is because the Census only asks you if you 'can' speak Welsh, not if you speak it fluently, or at home. This is absolutely critical.  For Welsh to be a living language, it needs to have children who speak it at home, and they need to be surrounded by other children who also speak it at home, or else in the playground, they will just speak English, as the table on the right shows.Thus, for Welsh to truly be a living language, its needs to have actual communities where the language is dominant, not just Welsh speakers present in the community.  Thus I wanted to see what the trends were in the language's remaining territory, and to me it seems that most of that territory does appear to be in a stable condition, although worrying trends have popped up in certain areas, such as Llanberis, the Ogwen Valley, and Bala.

This is therefore what I think, but what do you think? Maybe you live in one of these areas, maybe you don't, but I would love to hear your opinion, whether you think I'm right or terribly wrong.  Feel Free to comment below.