Why don't they Speak Irish in Ireland?

In Slovenia, they speak Slovenian.  In Latvia, they speak Latvian.  In Finland, they speak Finnish.  Yet in Ireland, they don't speak Irish; instead, they speak English.  Well, there is a language called Irish, but hardly anyone speaks it anymore - less than 5% of the Irish population speaks Irish as their mother tongue.

Ireland's situation is quite unusual; it and Belarus are the only two countries in Europe where the nation's own ancestral language is not what most people speak today.  Ireland is also the only Majority-mother-tongue English-speaking country where most people are not, and never were, of British descent, unless you count Jamaican patois and Grenadan Creole, of course.

So why don't most people in Ireland speak Irish?  The obvious answer would be 'British Rule' - something which lasted in various degrees, from 1169 until 1922.  However, most countries in Europe were also under foreign rule for centuries - Finland, to name an example from the first paragraph, only gained independence in 1917, five years before Ireland, while Slovenia and Latvia only did so in 1991.  Their languages continued to be spoken by their respective peoples in spite of foreign rule, while Irish did not. 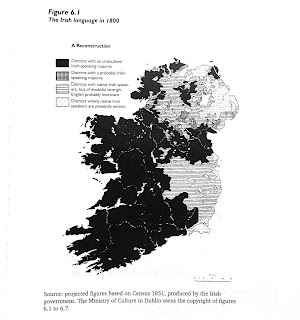 In fact, the situation in Ireland is quite extraordinary, and unlike any other other situation in Europe, at least outside the British Isles.  Even compared to regional languages, in say France or Spain, Irish was unlucky.

Whereas the demise of regional languages in France and Spain was largely a twentieth century event, aided by the modernisation changes that occurred then, the death of Irish was most definitely underway in the Eighteenth Century.

Indeed, as early as 1715, it could be remarked that "English is now so universally spoken by all the young Irish here that we may hope in the next generation Irish will be quite forgotten..." and the map on the right shows that Irish was already lost to large swathes of the country by 1800.

Another answer that might seem obvious is the Ulster Plantation - the settlement of mainly Scottish protestants in what is now Northern Ireland, leading to Northern Ireland being majority Protestant and Unionist.  But that doesn't explain why most of the rest of Ireland, and most catholics, no longer speak Irish.  On the contrary, as Reg Hindley described in The Death of the Irish Language: A Qualified Obituary, the death of Irish in Catholic Ireland started in Leinster, not Ulster.

After all, the settlement of Ethnic Swedes on the Finnish coast never resulted in the death of Finnish elsewhere in Finland.  Either way, for me, the fact that the Irish language was killed off so early, and even at all, in fact, defies all logic. In fact, language death in the British Isles generally has always been a puzzle for me.

In 1700, there were six non-English languages spoken in the British Isles (excluding the Channel Islands): Irish, Manx, Scottish Gaelic, Welsh, Cornish and Norn, the Nordic language of Orkney and Shetland.  By 1800, Cornish was extinct, and Norn, fifty years later.  By 1914, none of those six would be majority languages in their traditional territories.

In Italy, France, and Spain, regional language death only really happened in the century after that and it can all be easily explained by the great modernisation changes which occurred - compulsory education, industrialisation, urbanisation, the radio, television and increased inter-regional mobility.  In Ireland, Cornwall, and Orkney and Shetland, language change happened long before any of this modernisation, and therefore I can't help but ask how on earth it happened.

The decline of Welsh in Wales is the most recent case in the British Isles, and the only one which actually makes sense - it was so obviously linked to the industrial revolution, compulsory education and the in-migration of English-speakers.  When Catholic Ireland became English-speaking however, the population was overwhelmingly rural and pre-industrial - not a situation where you expect to find language change.

The other five minority languages, however, were all in areas that were not really effected by the industrial revolution, and indeed, their respective territories were either in remote areas of Mainland Britain or on the other islands of the British Isles.  You'd have therefore assumed that their chances of survival would have been greater than any regional language on mainland Europe, given their geography.  Yet their respective demises happened before that of Welsh and most definitely before that of regional languages in France and Spain.

So here is the perennial mystery: How on earth did English manage to kill off languages like Cornish, Norn and Irish, centuries before regional languages on the continent were killed off, and without the aid of any modernisation, when, if anything, the local languages of the British Isles had geography on their side?
Posted by Unknown at 10:56